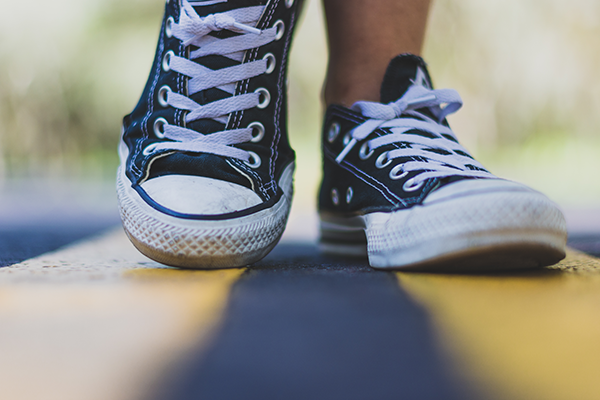 My name is Eva Medcroft. I am a marketing and design professional, business owner, mother and social activist.

I am not a mental health professional. I am not an expert on Narcissist Personality Disorder or narcissistic abuse, but I am learning.

This site was launched to take back my life and my reputation from the malicious smear campaign launched by a narcissistic abuser.

My goal is to help others with similar stories connect to valuable resources and learn from both my successes and my mistakes along the way. And to do so without feeding my abuser his narcissist supply.

Why the Converse? Oh yeah...he stole my Converse because they looked cute on me. Just another one of those things easily replaced.

When I first sat down to write my story, I wanted to pour it out in every toxic detail. But that really isn't the purpose of this site.

My story is basically the same as every victim of narcissistic abuse. It started the same:

It progressed the same (it's amazing how unoriginal abusers are):

I was with him ten years. I was isolated for seven of them. In the last three years, my eyes were open to the fact I was in an abusive relationship and I was building myself back up.  I had a support system and was growing more independent – but I still didn't understand how deep I was in.

Although my friends were telling me I was with an abusive narcissist, I really didn't understand. I thought, sure, he's a selfish bastard. But that's not what it is. An abusive narcissist is someone with Narcissistic Personality Disorder. They can range in severity and the signs they display – and sometimes they have multiple disorders that, combined, is known as a malignant narcissist.

I was in both a romantic and business relationship with a malignant narcissist. And I left without knowing what was going to happen.

When I was leaving:

I got a temporary restraining order that also gave me temporary possession of our residence to get my personal property. After his eviction, I returned to find:

He continually violated his restraining order. He and his niece were calling friends and family to find where I was hiding...which he eventually did.  I had to hide again, with the help of a domestic violence resource center, until I was able to leave the state.

I was living in fear. The hearing for my restraining order was split into two dates due to time constraints. I had to leave before his defense was heard and, due to his perjury, the motion was denied.

But this wasn't all he had planned. When I left, the malicious abuse of process, cyberstalking / harassment and extortion began. That is where I am today – processing, mentally and emotionally, to recover from the long-term abuse from a malignant narcissist while still being abused long-distance.

Make no mistake, I would MUCH rather be in the position I am in today than where I was for 10 years.

I am still seeking answers and still learning. And want to share what I have learned to help other victims of narcissistic abuse and cyberstalking and harassment.

I hope that you can learn from both my mistakes and my successes.